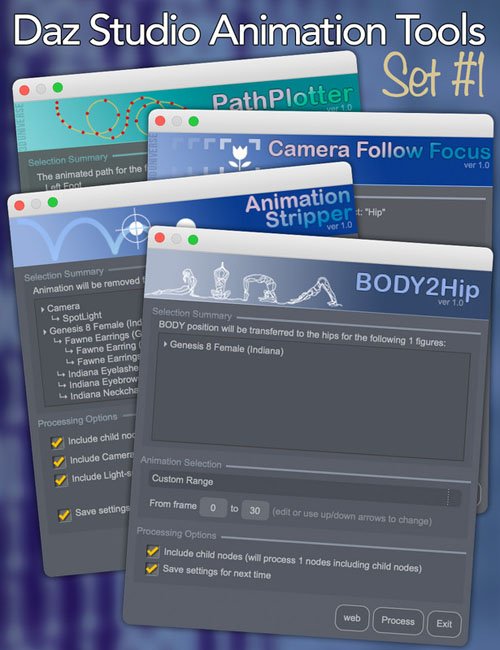 This set contains the following tools:

Animation Stripper:
This utility will "freeze" the selected objects at the timeline frame the script was run on. This is ideal when an element in your scene was mistakenly moved or changed in some way at some point in the animation timeline. Settings can include pose, translation, shape, and scale for figures, as well as camera and light settings.
This can be done for a single object or an entire scene if required.

BODY2Hip:
Having position and rotation information saved on the [Body] element of a figure is certainly not ideal as it limits being able to have the figure in the same pose in a different position in your scene.
BODY2Hip will transfer the position and rotation that has been applied to the [Body] of a figure to the [hip] node of the same figure for a single frame, custom range, or an entire animation.
This can be done for a single figure or multiple figures across part or all of an animation.

Camera Follow Focus
This utility allows you to easily set a camera to keep its focus perfectly on a specific object throughout the animation timeline. This can include depth-of-field settings as well as camera aiming.
Processing can be applied to part or a full animation range. Genesis 2 Male and Female Base UVs for Genesis